Wading out of Llyn Cwm Bychan 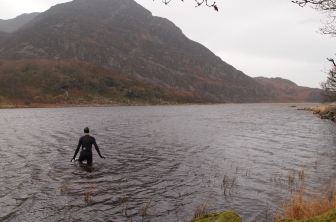 Llyn Cwm Bychan in the shadow of Carreg-y-saeth

“After supper I went back up the mountain and camped at the top end of a lake, Llyn Cwm Bychan, on a little sheep–mown peninsula where the river enters it… I woke to the beginnings of a fine day and bathed in the lake off my peninsula, swimming through lingering miasmal mists rising off the surface.”

I have spent over two years recreating Roger Deakin’s ‘swimmer’s journey through Britain’. I have dipped my hands in burns on Jura, swum over kelp forests in Scilly and sat at the precipice of deep gorges in the Yorkshire Dales. But I have failed until now to cross the border into Wales, to swim in the deep pools and high lakes of the Rhinnogs.

These distant mountains have played on my mind for months. My failure to reach them, compounded by my inability to drive, has meant they have been pushed further and further back into my schedule. My year has been full of wild swims, from mid–January through to early November. I have travelled all over the UK and my urge to swim in these cold mountain spots has not dimmed, while my awe at how Roger squeezed 90 per cent of his adventures into six short months has grown. Other commitments have meant I have not been as focused on watery matters as my predecessor.

Leaving this trip until the onset of winter was always going to feel like a mistake, albeit an unavoidable one. I have become desperate to complete my mission before the true cold sets in and the need to break the ice becomes a hideous necessity.

We drive into Wales on a murky morning, crossing into a place ‘stiff with magic’, as Roger says, just outside of Chester. The fog clings to the low hills which skirt Snowdonia, bright fog lamps the only reminder of other human life close by.

I’m well aware that my timing means that a long schlepp over the pathless mountains near Llanbedr, and onwards to hidden waterholes, is all but impossible. I have neither the wherewithal nor the will for an ankle–cracking scramble through clouds and constant rain and so James, who has driven me up from London, and I head directly for Llyn Cwm Bychan, away up a narrow track alongside the rush of Afon Artro. The river tumbles over high rocks and beneath old stone bridges. I imagine hurtling down it using Roger’s friends’ patented Dartmoor swimming technique, snorkel on and head in, ignoring fast approaching boulders. Autumn still clings here and there is a wild, far off beauty about the whole place.

We drive over a final hill before being treated to a stunning view of the Llyn beneath us. We stop to take it all in. The mile long lake is whipped into a frenzy at this western end, white tipped waves making it look spectacular, yet deeply uninviting to the wild swimmer. I think of Roger sliding into a placid body of water on a June morning. This is about as far from that idyllic vision as it’s possible to get.

Ditching the car at the far end of the lake, we set off in search of a decent entry point. James is on towel and camera duties, wisely electing to stay dry while I head off into the lake. The rain is falling harder now, incessant as we swerve off the track, under trees and over mossy rocks, emerging onto the bank. A broken wall stops the slap of water from flooding into the damp woods, where I drop my bag, stand on my rain coat and proceed to get trussed up.

The lake at this sheltered end is reedy. Sharp, tan–coloured spikes stand to attention above the surface of the water. I crawl over the wall and slip in. I wade out a few metres and lose my footing, slipping to shoulder depth before rising high again, the water at my knees. The lake bed feels grassy beneath my neoprene–clad feet, the icy water soaking through my gloves and sending my hands numb. I lurch forwards and begin to swim, steady waves knocking my face and sending splashes down the back of my wetsuit. A couple of hundred metres out, I’m still able to stand, looking back at Roger’s little peninsula and around to James, who’s standing sheltered under his umbrella. My last Waterlog swim, in the marshes at Blythburgh, is about as far east from West Wales as it’s possible to get in the UK. But the water is just as cold, even if the soaring, heathery mountains offer completely different surroundings.

I stop and stare high up into the hills, imagining the water that feeds Llyn Cwm Bychan flowing down unnamed streams, passing through Roger’s favoured cwms and tarns on a steamy summer afternoon. But I’m happy here in this cold, wintry spot. I push myself back under the Welsh water, take a mouthful and realise I don’t regret coming when the weather’s unpredictable and the water icier. I flip on my back, take a final look at the view, and swim on.

← Blythburgh – into the marshes
Walnut Tree Farm: The moat →

One Comment on “The Rhinnogs – swimming in Llyn Cwm Bychan”