West Jura – raised beaches and beyond 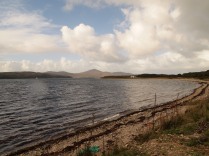 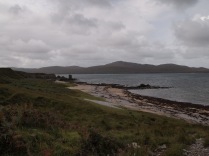 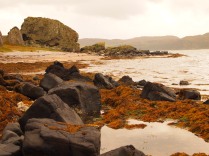 “When I had first seen the words ‘Raised Beaches’ on the map, recurring like an incantation, forming a ribbon along the western shores of Jura, I immediately wanted to tramp over to this wilderness and explore them.”

Past the Inver estate office, up a car-wide track, clad head-to-toe in waterproofs, we stride out towards west Jura. A light rain whips across the sound from nearby Islay, as deer gawp at us from a distance. Does bound off over the boggy moors, while the odd stag keeps watch as we walk on.

The western side of the island is largely inaccessible, the far off delights of Glenbatrick Bay only reached by boat. Instead, we’re making our way up the eastern side of Loch Chnuic Bhric, before looping back along the coast and to one of Roger’s fabled raised beaches.

With the rain clearing, the walking here is relatively straightforward, eased by Land Rover tracks taking stalkers into the hills. And so we beat on, heads down, the Paps of Jura looming ever larger. Stepping off the path, north of the choppy loch, its clear why Roger says hooves are preferable to boots. The ground is marsh-like, tufty grass and peat bogs swallowing our boots whole.

Soon though, peat gives way to sand and we are inching our way down rubbly cliffs and onto an astonishing, empty beach. It’s warm and the sun is poking out, the waves lapping over several feet of stinking kelp. In short, it’s perfect swimming weather. But with my arm trussed up in plaster, there’s no chance it’ll be happening today. Instead, I look across to Islay, imagine the currents at work and dip my hand in at the water’s edge. It’s icy, far colder than the burn water on Loch Tarbert earlier in the week. I imagine a swift swim, my skin alight as I dry off. It’s unbearable not being able to get in.

And so we continue. From bay to bay, over cliff tops and back up onto the moors briefly, before dropping back onto the sand. By now I’m dripping under five layers and desperate for a dip.

Then it appears, as we take one last tramp over the cliffs. The first raised beach on this west coast. It stretches a few hundred metres back, staggered and graded pebbles. Three small, heather islands, lined up in a row as it rises. I can see its allure and know that further north from here, these raised beaches can be found all the way along Loch Tarbert. I imagine a swim here, and up there, tantalised by the thought of returning next summer for a lengthy yomp to all those far off spots.

We stop for a while and admire the sun on Islay’s hills. But soon we’re walking again. Along the coast, along the water. The beaches shelve slowly, the sun dancing across the surface. But as we return to Feolin and our car, my plans for a paddle are dashed as a storm blows in.

Now though, I’ve seen Jura and it’s wild swimming delights. I understand why Roger so desperately wanted to come here and swim all over the island. And so I’ll be back, ready to face next summer’s midges and swim for days among the lochans, beaches and bays.

← Loch Tarbert, Jura – the boat house and beyond
The Walberswick shiverers →

2 Comments on “West Jura – raised beaches and beyond”