Bryher – through the maze on the Scillies 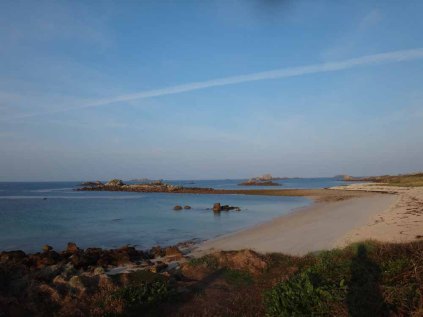 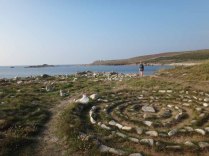 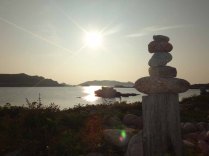 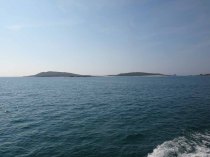 Bryher from the boat 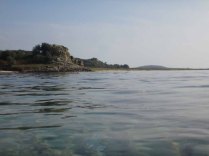 In the water at Stinking Porth 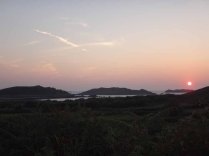 Sunset from Shipman Hill Down

“I followed a rim of doughnut rocks to the white sands of Great Popplestones Bay. Apart from a solitary sun worshipper out of sight at the far end of the bay, I was alone. It was still April, and the swimming season could hardly be said to have begun.”

Stocked up on pasties and San Pellegrino lemonade, Molly and I tread carefully down the stone steps and onto the waiting Firethorn ready to take us slowly out of St Mary’s harbour and on to Bryher. Having made the Scillonian ferry from Penzance with seconds to spare, so nearly stranded victims of a nonsensical smartphone parking app, we have taken our seats as early as possible for this short ride.

Chugging over Tresco Flats, the flat–bottomed vessel goes slowly enough for us to gawp down at the sandy bottom of the bay. We swerve wildly to avoid rocks and sandbars, eventually tapping lightly against the small jetty which sticks out from Bryher perpendicular to Tresco across the water.

Coming to the Scilly Isles has been foremost in my mind since my first tentative swims around the lidos of London two years ago. The most distant of Waterlog swims, it is also Roger’s first port of call. Missing out was simply not an option.

Thankfully, the September weather is searingly hot, lending the islands the air of a tropical paradise. I think back to the bracing plunge in the Severn a few weeks back and struggle to believe that pre–autumnal dip was in the same country.

After slurping coffee at the Fraggle Rock cafe, we repair to the campsite, hauling up our tents in a competition, the need to get into the nearby bays so nagging that I throw mine up in the most haphazard fashion imaginable. It cracks like a saltire in high Scottish winds. But the breeze is minimal. My inability to build sturdy canvas digs is a quality I like to keep from my friends. Molly looks on in laughing disbelief.

We take the path west out of the campsite, screaming with joy as the endless views down to Stinking Porth and Great Popplestones Bay reveal themselves through the bracken. We walk at a canter, excitable as dogs on a Cornish holiday, the swims of the past few days clearly having gone to our heads.

At Stinking Porth, the hum of bladderwrack sticking in my nostrils, I strip down and ready myself for my Scilly baptism. I’m fully aware that the water here will be far colder than on the mainland. But the sting on my thighs is like nothing I’ve experienced all summer. I allow myself a few loud, heavy breaths before slowing myself down and marvelling at the clarity of it all. The white sand, the ice clear water, the seaweed swaying on the seabed.

Molly, far hardier than me, continues out into the depths. I follow Roger’s advice and repair to the beach and get togged up in full wetsuit and boots, snorkel strapped to my head. I haven’t rubbered up, so to speak, since the mill pool on the River Bure back in February. But the extra protection allows me to propel myself far out without fear of shock. It proves a wise decision.

Face down, I lose myself in a wild swimming reverie. The sway of the shallow sea weed gives way to a full kelp forest, moving slowly with the incoming tide and stretching down twenty feet deep. It is indescribably beautiful. I swim and swim and swim. I think of Roger’s wetsuit justification, that otter’s never feel the water on their skin, and refuse to give in to that pang of guilt for not doing this bare back.

Dried off and happily scorched after an hour on the sand, we wander the few hundred metres to Great Popplestones Bay, fish creating havoc around the edges of the Great Pool between these two little bays. Across this inland body of water, we can see guests at the Hell Bay Hotel. It’s no longer the ‘modest’ establishment Roger saw. A spa hotel with a heated pool and putting green, it doesn’t quite fit with the honesty box holiday vibe of the rest of the island.

Dropping out of sight, we pass our own Scilly maze, a circular stone affair above the dunes at Popplestones. Along the rim of the beach, stones are balanced on top of each other, reaching north and out towards Hell Bay proper. Molly opts to read and sunbathe while I pull myself into the damp, sandy wetsuit. I strike out fast to the rocks and get immediately lost in another underwater seaweed maze. I reach down and touch the tendrils and think of the creatures hidden deep away from my rummaging mitts. Normally these things leave me hurtling back to dry land. Today I feel at one with the water and allow myself to explore. I starfish face down, the snorkel turning me into the world’s most relaxed Darth Vader impersonator.

Fully braced by our first Bryher dips, we eat a dinner of bread and cheese, and run to the top of Shipman Down Hill. The exquisitely clear day has heralded what promises to be a perfect sunset. We watch it slide fast towards the horizon over Hell Bay. Merry on Malbec, we make lunar–like jumps over mossy Sea Pinks; I imagine this is what walking on water feels like. Directly opposite the just set sun, a full moon rises. It’s hard not to feel as if Bryher is the axis on which the world turns. Bats and swallows track our descent through gorse and bramble and back to reality.

Late at night, moon shadows cast me long into the grass as I stride out to meet the call of nature, as if I’m in a reverse Wizard of Oz. I fall back into my wind–whipped sail of a tent and settle down to dreams of paddling further and further out into the flat calm Atlantic.

I need a long walk and a deep swim to soothe my cracked back and stiff legs after a few fitful hours on hard Bryher ground. On the walk down to Green Bay, I stop at Veronica’s Farm and pop £3 into the honesty box for some vanilla fudge. Sustenance can be hard to come by on these faraway islands after all.

Down in this wide sweep, I hope to see those ancient walls and seaweed hedges which Roger encountered. Instead, with the tide racing out as fast as I can wade, I find myself crawling through knee deep water. The icy drink slips down my neck, freezing my face into a rictus grin. After half an hour, amateur archaeology time is up. Our boat back to St Mary’s and away to the mainland looms and we have Rushy Bay to soak ourselves in first.

This stunning spot on the southern tip of the island is unquestionably the most beautiful beach I have seen in the UK. Its short curve is dotted with sunbathers, a pair of golden retrievers splashing through the far off waterline, the shouts of their owner breaking the silence. Molly takes the wetsuit this time. I owe it to myself to have one last swim here without neoprene to dull my senses. After all, this must surely be the last summer swim of the year.

Like Stinking Porth, the water here is ludicrously cold. But having pushed my hands through it on my long kelp dips, I have grown somewhat acclimatised. Not so much that I don’t grunt like a sow, but still, this is progress. Molly dips her head and immediately calls me over to spot a starfish disappearing away into the rocks, a pair of tentacles waving goodbye as I clasp on the mask and take a look. No matter. I ignore my body’s urge to retreat and head out further, revelling in this timeless scene.

As Molly floats on, I dry off and lie back on my towel. Bees zip around my ears, their buzz like the sound of distant F1 engines. A plover dashes towards the rocks as she walks back in, a pair of oyster catchers piping away in flight.

Tents packed, we sit on the quay and survey these islands. It is the end of this Cornish Waterlog adventure. We share a brief panic about our connecting boat not arriving, but within minutes we are sitting on its prow, watching this paradise island slide from view. Roger might not recognise the Hell Bay Hotel, or the redecorated Fraggle Rock and nearby Town Shop with its impressive cheese selection and a wine collection to rival the smartest of London restaurants. But he would see the bees taking flight to Tresco, the Sea Pinks glowing in the last of the daylight and the swimmers following in his wake, soothed by the coolness of the ocean.

2 Comments on “Bryher – through the maze on the Scillies”