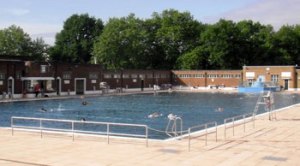 “I went in the next day with two or three dozen early-morning regulars, and for a glorious moment, during some lull in the proceedings, I had the entire sixty-seven yards of water to myself. The solitude lasted for a single blissful length.”

Having made hard work of the bike ride up Haverstock Hill, followed by a bumbling attempt to enter via the exit gate, the water of Parliament Hill Lido comes as a blessed relief. A few pesky grey clouds have begun to bubble up as I ditch my towel on a bench and make my first tentative steps into the (very) shallow end.

After a bracing dip at Highgate Ponds last week (temperature 8ºC) and a few excursions into the sea off Lyme Regis over the Bank Holiday, the 15ºC here feels positively balmy as I dunk my head below the surface and strike out on my first length.

Roger visited Parliament Hill on an early November morning with some hardy locals, indulging in the daily free swim between 7am and 9am. Those days have passed now, with a £2 fee now demanded from those early risers. Arriving at 1.30pm, just a couple of days after the lido opened for the summer season, I was asked to stump up £5.50. Cheaper than Tooting, but still a hefty price for an indulgent paddle.

As well as those prices, much else has changed here since Roger’s time. A stainless steel shell was placed into the main tank in 2005, the pool feeling a darn sight cleaner than other lidos in London because of it.

Easing into my first 60 metre length, I’m struck by just how shallow the pool is. For around 10 metres I find myself pawing along the bottom before I reach a manageable depth. On my first return from the deep end, I keep imagining I’m about to hit the edge, only for the puddle-worthy 75cm of water to drag on for what feels like forever.

Shallow woes over, I settle into a slow, steady front crawl, the sun hitting my back as it breaks through the growing cloud. Turning to swim back, I notice that I’m alone in the water. Other swimmers are either busy drying off, or lolling around by the cafe. It’s at this point I remember the line from Waterlog, about that one solitary length. I enjoy mine at a slow breast stroke, giving me the chance to take in my surroundings and feel myself glide through the water. It’s as I’m quietly ploughing my way across the placid surface that I remember Roger’s passage about the slack water he encountered here at Parliament Hill.

“The absence of wavelets, or other bathers, means you can move in perfect rhythm, so the music takes over,” he wrote. “Mind and body go off somewhere together in unselfconscious bliss, and the lengths seem to swim themselves. The blood sings, the water yields; you are in a state of grace, and every breath gets deeper and more satisfying.”

As I lift myself from the water, muscles burning, and I begin to dry off, it is these words I have in my head. I only experienced that zen-like state for a brief sixty metres, but it could have been forever. Most importantly, I’m lucky enough for it to have happened here at Parliament Hill, the same place where Roger too reached that state of ‘unselfconscious bliss’.