Posted on October 1, 2014 By joeminihane 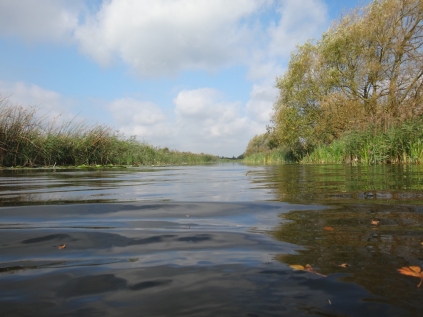 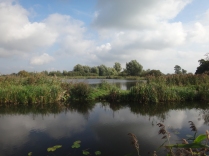 Across Reach Lode and into Adventurers Fen 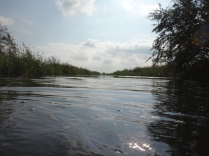 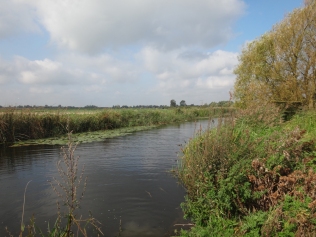 The lode from pool side 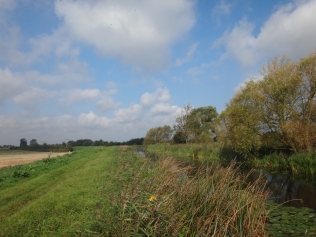 Up on the bank

“I went off to swim in Adventurer’s Fen in a pool at the junction of Burwell Lode and Reach Lode. I went in across a raft of reeds and subsided rather than dived into the half–clear green water. It was surprisingly shallow; only three to five feet, with a soft, black mud bottom.”

Feeling cleansed and clear of mind after my swim at High Point, I felt ready to strike out from London on a final assault on this long wild swimming adventure. And so I find myself struggling into a pair of running trousers, bare legged in full view of the high platform at Waterbeach station, readying myself for a long wade through a towering bed of stinging nettles.

Things have rarely been straightforward in my two years recovering the ground Roger visited in Waterlog. Forgotten maps and broken wrists have barred my path. Today though, the literal obstacle of some off green stingers is enough to send me raging. This poorly kept footpath was supposed to be my cycle route up onto the Fen Rivers Way. It still is, albeit one that’s been seriously neglected.

Having negotiated the muddy path, my shoes sopping wet after five minutes traipsing, I hop onto the saddle and begin the long judder along the towpath towards Adventurers Fen. October is just 12 hours away, but with the sun burning off the last of the morning cloud, it feels more like mid June. I sweat and curse as I negotiate countless fences and stiles designed to keep cyclists out. I imagine Roger would have happily heaved his own bike over fences and ignored the signs warning cyclists not to use this right of way. It’s all the excuse I need to pedal faster.

The Cam is looking resplendent in the autumn heat, but this meandering river is not my swimming target today. I am heading for a pool on Adventurers Fen, with a plan to swim in Burwell Lode too. I want to follow Roger’s route onwards along Wicken Fen as well, perhaps riding rather than swimming. It promises to be a lengthy mission.

After clattering over an empty lock and pedalling hard through tufty grass, I finally reach the village of Upware, swinging right down Burwell Lode. Aside from a couple of anglers, there’s no one about. The only sound is the flap of birds and the distant bark of dogs from a riverside kennel.

Reaching the pool, I drop my bike on the bank and assess my options. Frankly, there’s only one. Swim across the twenty feet of Burwell Lode, clamber through the reeds and drop into the water on the far side. I waste no time. With no other river goers around, I change in quick smart fashion, hopelessly exposed to the elements and watched by a cawing bunch of corvids in the barren field beyond.

I plunge one foot into the lode and immediately lose it in the deep, silky mud. Sharp submerged reeds scratch at my legs as I surge forward, the stirred up mud causing an almighty sulphuric stink. Weeds slick around my arms as I power quickly to the far side, the thought of eels deep in these waters never far away. I remember a friend catching one when we were kids, its slick body winding itself around the thin line from his fishing rod, its sharp teeth on show. Shuddering, I grab at the short grass and pull myself free.

Refreshed, but on the edge of a hefty shiver, I stride two steps across and drop my foot into the supposedly shallow pool. Once again, my foot goes awol and I find myself diving in just to get the thought of the creamy mud out of my mind. It’s not nearly as shallow as Roger claims, though. Ten feet out I test the depth and find myself kicking frantically to stay afloat.

As I swim in a big, wide circle towards the centre of the pool, the sun reemerges from behind a small black cloud, lending the scene a summery air. The trees here have barely begun to turn, the whole wide open space still a verdant green, a natural up yours to the impending arrival of long nights, cool winds and icy temperatures.

I pull myself out as I feel my body temperature dropping, rushing back into Burwell Lode and swimming furiously towards my bike and clothes strewn on the high dyke. Getting out is far harder than getting in. That same stench wafts up as I scrabble out, caked up to my knees. Thankfully it’s warm enough to sunbathe, so I dry off haphazardly and let the sun do the rest.

After a lunch disturbed by a flotilla of swans and cygnets, I cycle back towards Upware, crossing to the other side of this small river and shooting off up Wicken Fen. This winding, narrow stretch looks magnificent in the sun. I’m suitably cool after my swim and can’t face pulling on wet bathers, so I cycle Roger’s long watery path north. I pass the tall bird hide he mentions in the book, indulging himself in a game of hiding in the reeds from the twitchers inside. The only birder in residence today waves a hello as I ride past.

After a further ten minutes, I reach the confluence of Wicken Lode and the New River, where Roger hopped out and made his way back to his clothes. It seems impossibly far for a swim without a wetsuit, suggesting once agin my cold water stamina isn’t nearly as developed as my predecessor’s. By now it’s really warm, so I lean my bike against a convenient bench and doze in the sun. The reeds sing, the only other sound an unidentifiable cackle of birdsong. I make a mental note to up my birdwatching game this winter.

Opening my eyes, the first thing I see is a kestrel, flapping furiously, head dead still, hovering over the water. It swoops and dives as I try and steal a picture, clearly camera shy. I pick up my bike, give a nod of thanks to this clear stretch of Fenland, and set off for Ely by way of the Great Ouse.