Godrevy – over the Red River and into the sea 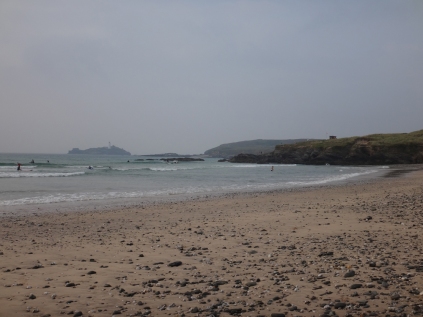 Down to the lighthouse

“The mouth of the Red River at Godrevy is outlandish in a dozen ways. In its unassuming way, it embodies Cornish history. It is one of the few special places around our coast where you can swim in fresh water and look straight out to the sea, and an ocean horizon.”

A pair of surfers wade clumsily through the Red River as it narrows, their long boards catching the wind as we slip down the steep dunes towards the beach. For a minute it looks as if we’re going to have to roll up our jeans and join them, before a small wooden bridge appears around the corner. An ageing stone chimney stack casts a dull shadow down the stream.

The river here is supposedly on its way back to full health after years of being polluted by toxins washed up from the old tin mine. It doesn’t run red, but there’s a terracotta tinge to the surrounding sand and the barren riverbed. Molly is not keen.

I stand by the banks and ponder. As Roger says, ‘If you haven’t taken a dip in dilute arsenic, or half a dozen other poisons, this is the place for you.’ Admittedly, I haven’t done so. But after being cleansed in the tidal pool at Treyarnon and standing in the breeze atop the cliffs at Godrevy Point, I’m not feeling it right now. The blue flag beach just ten metres to my left seems far more appealing.

Of course, Roger double dipped here, so I am at least following his ocean–going footsteps, if not his tin mine–soaked river ones. The returning surfers we’ve already seen were clearly in the minority. Despite the sun getting ready to make its final slide towards the horizon, the water is full of neoprene clad board goers. Some stand in the frothing shallow breakers, others sit watching the out waves intently, waiting their chance for a brief shot at vertical glory.

Wading in feels impossible after our sudden baptism in the tidal pool. Inch by inch we go, the sandy bottom seemingly forever knee deep. Eventually I plunge under one wave, and then another. I join a surfer who curses as he misses a ride back to shore. We are the only swimmers at this stretch of beach. The lifeguards are packing up for the day, but with so many others around, we take our chances and push out towards the eternal depths of the Atlantic.

Numbing iciness gives way to warm, end–of–day contentment. I dive to the bottom and resurface, bobbing along and watching wave after wave smash against the shore. The wind is rising and the swell begins to heave that little bit more. I let myself be eased back to my bags.

Both buzzing with endorphin highs, we sling towels around and struggle to get dry without babbling about anything, everything. It is the perfect second swim of the day, a searing dip in the sea blitzing the soporific motion of the car journey from Padstow.

Back at the Red River, surfers are now taking to the bridge instead of wading, an uneasy scum settling on the water. Braced, my wet trunks stuffed deep in my rucksack, I apologise to Roger for not indulging myself in a poison river dip.

← Treyarnon – in the tidal pool
Porthcurno – in turquoise water →