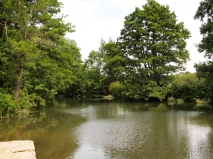 Upstream from the weir 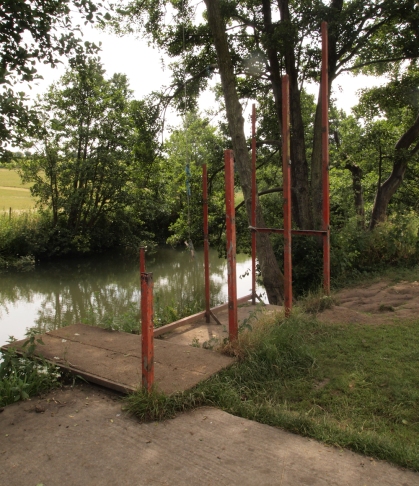 The once proud diving boards

The entrance to Farleigh swimming club

“I arrived in the mid–morning on an enchanting south–facing grassy hillside, swooping down to the riverside through a sheltered little water meadow almost within sight of the old castle at Farleigh…There wasn’t a soul about; everyone was at work, but I had been told to help myself to a swim anyway.”

The path stops dead about a mile out of Trowbridge. From here on, it’s a case of nestling as close as possible to the verge while horse carriers thunder past, or yomping through the grass, Alan Partridge–style.

Walking from Trowbridge to Farleigh and District Swimming Club has all the airs of an assault course. Public footpaths are overgrown, stiles collapsed in a heap and electric fences are strung tight across fields which should lead down to the banks of the Frome. My regret at leaving the bike and opting to walk instead is instant.

After an hour’s unpleasant roadside trudging, I arrive at Farleigh dripping in sweat and desperate for the cooling release of cold river water. A single car sits in the shade by a metal field gate, a pair of damp swimming shorts and a drying towel draped over it. A pleasing, surefire sign that I’ve found the right spot.

I get changed in the old tin shed at the top of the hill. The wooden floor from Roger’s time has been replaced by cold flagstones, coated in leaf detritus and fox shit. It’s still enjoyably rudimentary.

I wander down to the bank and leave my things next to another pile of rucksacks and discarded clothes. I don’t actually spot my fellow swimmers until I stroll upstream, catching sight of them stroking leisurely underneath the old diving boards.

I say diving boards. It’s just three pillars where the triple–tiered pride of this longstanding river swimming club used to stand. Next to it, though, is the self–same ash springboard from which Roger once pounced off naked and away into the Frome. I teeter along to the edge and peer down into the dark, deep waters. The board is five feet from the surface and I immediately lose my nerve, scuttling away in embarrassment.

Instead, I potter around the roots of a nearby alder, contemplating my entrance before I realise I have no urge to jump today. I walk along to the weir. Where the rage of the river falling away downstream was the only sound Roger could hear, today its just the rumble of the odd car on the A366 that resembles falling water. The river level is low and the weir bone dry.

I tip toe along it, surveying the narrow stream, wading in before sliding under. Its absurdly chilly, even for June. My cosseted body has got used to the 22ºC delights of Brockwell Lido in recent days and is not up for the shock. I push hard against the current, pass a handy rope swing and the once mighty diving boards and turn myself around, shoved along speedily as I return to my entry point.

The dark green water has a murk and urgency which I’ve not experienced in recent weeks. The lake at Henleaze was a cool treat and Dartmoor’s busy streams were icy clear. This feels like a river affected by its agribusiness surroundings. I think of run–off and fertiliser as I spit out an accidental gulp.

Braced and sufficiently recovered from my road walking ordeal, I eat my sandwiches on the grass and read Waterlog. There are small changes at Farleigh, yes. Diving is no longer allowed according to a small sign on a fence by the entrance. The weir isn’t thundering liked it did. But there is otter evidence everywhere, from flattened grass to spraint on the banks.

Lunch finished, I pull on my jumper to warm up, but can’t bring myself to leave. I’ve come all this way and not even thrown myself in from the spring board. I feel like I’m letting Roger down. And so, I quickly strip off again, march purposefully to the warm coconut matting and hurl myself in in an inelegant, sprawling jump. My ears roar and eyes sting as I surface. It’s time to trudge back to Trowbridge.