The pool basks in the June sun

The mill leat on the left

Swallows nesting in the eaves of the changing rooms 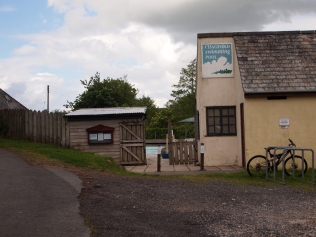 Chagford Pool from the main road

“I also visited the charming village of Chagford, fed by the River Teign, with an outdoor cafe. It is fringed with trees down one side and – the last thing you expect to see on the edge of Dartmoor – a vigorous hedge of bamboo.”

Summer has returned to Dartmoor by the time we arrive at Chagford. The passing showers have fled out to sea, leaving blue skies, the perfect adornment for our final dip of the day, in the village’s river-fed pool.

The four of us stroll past thatched cottages and an honesty box containing pickled onions (£1 a jar), following the bridge over the tempting River Teign and on to Chagford Pool. We pay our £4 entry fee and duck into the high–vaulted changing rooms. Swallows dart in and out, their nests snugly hidden in the eaves, chicks noisily demanding to be fed.

I jump in at the deep end and immediately notice how fresh the water feels compared to my other favourite lidos at Tooting Bec and Brockwell. Fed from a mill leat, which used to power the old water wheel at the far end of the pool, the water only contains the smallest amount of chlorine. When the wind whips up and I get slapped in the face by a small wave, the taste isn’t of bleach but fresh, Dartmoor river water.

While each of us settle into our stride, ploughing out slow lengths and luxuriating in water that doesn’t send us hurtling off in one direction like the West Dart, local kids go giddy in the heat. A group indulge in a truly brutal game of splash which at their age I know I would have bowed out from in tears. Some dive to the bottom, others play in hired wetsuits (£1 per swim session) in the shallow end while parents watch on from the sidelines.

Towelled off, we drink tea from Chagford Pool mugs to warm up. I fall into conversation with Sue, one of the lifeguards, who first came here in 1985 and ‘fell in love with the pool’. She’s been ensuring everything stays in order ever since.

She explains that since Waterlog and Kate Rew’s Wild Swim, the pool has enjoyed a surge in popularity that has saved it from going out of business. People, it seems, would rather swim outdoors in fresh water than drive all the way to Exeter to power out laps in a sweaty sports centre bath. I can understand why, especially with the sun shining and the tea warming my insides after a day’s swimming.

We talk about the resident swallows. ‘There are eight nests in total,’ Sue says. Last year they were all full, she tells me. But this summer only a few have seen birds return. ‘It’s great that they’re here though,’ she says. ‘The only problem is cleaning the shit from the changing room floors’.

It’s the very basic nature of Chagford Pool that makes it so alluring. Even though it was renovated in 2000, and a new pool lining added this year to stop any major leakages, there’s something brilliantly rough and ready about it. From the simple changing area to the book case selling second–hand novels, there’s a communal aspect which I’m sure Roger would still approve of. In many ways, it’s a south west sister to the excellent pool in the peaks at Hathersage.

Tea drunk and swim done, we head off. The cafe has shut for a late afternoon break, but the kids stay in, screaming up a storm as we head off to rest and recuperate for another day’s dips.