River Wensum – slowly against the current

The rope swing in the distance 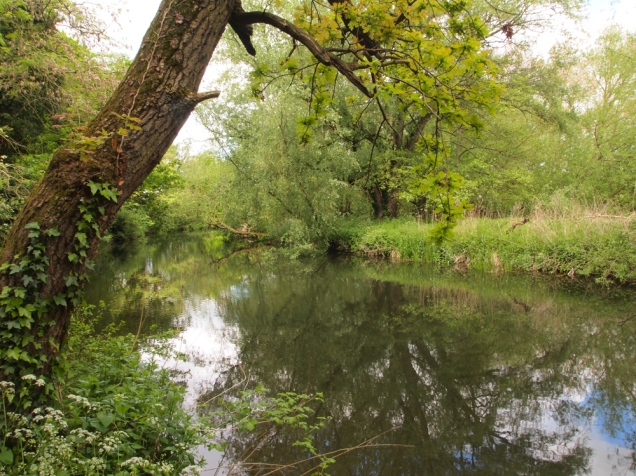 “During the 1920s there was a gang of boys and market-traders in Norwich who used to swim in the River Wensum and dive off the bridges for small change.”

The pace could be politely described as mean as we turn off of the main road and along the Marriott Way, skirting an industrial estate and the greenish waters of the Wensum, just outside of Norwich.

Tim, Molly and I are on a mission. Molly has found a secluded spot upstream, away from prying eyes and the brick-walled sweep the river takes through the city. She’s yet to try it out and we’ve all ditched work plans for this early summer swim.

My wetsuit remains on a hanger at home, stuffed away after a weekend trip to Rhossilli, South Wales and hopefully there to stay until autumn comes around. Today’s dip will be my first river swim this year without the taut protection of thick, warming neoprene. I feel as brave as Sonny Goodson, the diving daredevil who jumped from the roof of Norwich Art School into the Wensum in 1924.

Roger speaks of Goodson’s exploits at length in Waterlog. But like me, my predecessor wasn’t so keen on extreme feats of derring-do. At least not the kind that involved barrelling off the top of a 69 foot high parapet into 12 feet of water. Today my questionable behaviour will extend to sliding into the Wensum in shorts only and no further. It is May after all.

After an hour long walk, stalked by chirruping blackbirds and the bright glimpse of jays, we arrive at the chosen place. It’s a quick slide down an embankment to a May-time riverside paradise. The river here is clear, the bed rocky. Fish galumph out of the water and a solitary mallard watches on as we slip out of our clothes and down towards the water.

Tim is first in, as ever. He steps forward in gingerly fashion. There will be no tomb-stoning face-forward this afternoon. Eventually, as the riverbed slopes from beneath him, he baptises himself in the Wensum and surfaces in a rush of heavy breathing. Frantically, then calmly, he swims upstream, barely moving against the water’s relentless push.

Molly and I follow. Both of us attempt a languid entrance, but our gasps are audible. I’m fighting the last vestiges of a cold, picked up in the Atlantic seas near Swansea I’m certain, and so my chest heaves, my body fighting the very idea of being in water so cold. In reality, the nippiness soon disappears and while Tim towels off, Molly and I stroke against the current, getting next to nowhere.

I turn and let the Wensum take me back to the small beach where we paddled in. I look up at the drooping willow, about 50 metres away, a tempting blue rope hanging from one of its lower branches. It seems so close, but I know it’ll take all my energy just to reach it, let alone climb up and throw myself back in.

Instead, I settle for the knowledge that this swim is just the first of many summer dips. We hatch plans to return with friends and picnics, a day when rope swings and endless ins and outs won’t bring a chill to our bones.

Sonny Goodson may have found our short May sojourn terribly dull compared to his infamous jump. But later, as I walk through the city, past the Art School on my way back to the train and London, I imagine he’d at least be pleased that river swimming is alive and well in his parish almost a century on.

2 Comments on “River Wensum – slowly against the current”