River Itchen at Winchester – hopping over the fence 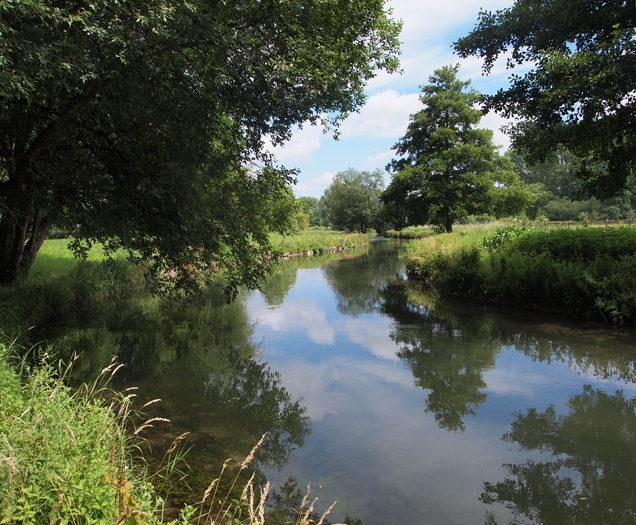 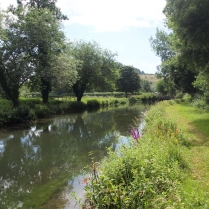 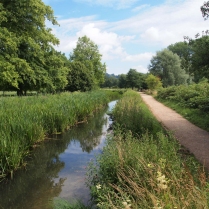 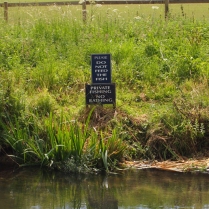 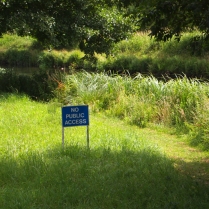 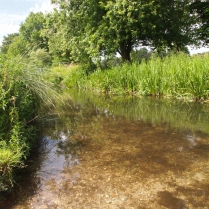 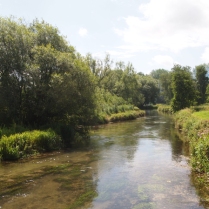 “Approaching the Itchen along College Walk, I came eventually to the water meadows and two or three piebald horses grazing by the river. I vaulted a low fence, steadying myself on a PRIVATE FISHING notice, and crossed the meadow to a convenient willow, where I changed into bathing trunks and a psi of wetsuit boots for the return journey from my swim.”

There’s a ‘first day of school holiday’ buzz in Winchester as I cut through the cathedral grounds and on past the College. The city is alive with teenagers tasting the first of their six weeks of freedom, busy parents scurrying after excitable children.

Turning down College Walk, I leave the hubbub behind me, only to find the College itself something of a building site. The chug of diesel engines and the smell of wood fires fills the air as I turn down the towpath alongside the Itchen.

Soon the main river swings into view, its clear waters slipping silently over a chalk bed. I can make out every detail on its surface: pebbles slick and green, weeds billowing, the odd fish slinking in the shadows.

Immediately, there’s a sense of this being another space, somewhere not meant for the public. Those PRIVATE FISHING signs abound, staked into the bank and along sharply barbed fences, designed to keep the path straight and the riffraff away from this renowned trout–fishing spot.

Winchester College owns this stretch and its fishing rights are strongly protected. Roger’s impishness meant he had no qualms about skipping over the fence and taking a long dip, carried along by the current towards the Itchen Navigation. My unshakeable fears of being caught in these situations, a pathetic sense of duty I’ve been unable to shift since childhood, means I look sheepishly around to see if anyone is so much as watching me assess the bank for entry points.

I reach a glorious spot, with three benches on the towpath for taking in the most bucolic of scenes. On the opposite bank, an officious sign has been drilled into the ground. ‘PRIVATE FISHING. NO BATHING,’ it reads. As much as I would love to swim across to this point, a low metal fence, overgrown with long grass and nettles, makes accessing the water on this side impossible.

Instead, I strike on. I consider dipping into the stream which runs parallel to the path, but its narrowness and shallow waters don’t appeal. I continue and reach the road, and it’s here I find my chance.

Easing my way through a gap in the fence, I make my way through a small patch of woodland, which opens out onto the perfect meander. The water at the bank is about a foot deep, ideal for dipping straight in. Propped up against a tree, away from prying eyes, I quickly scramble into my bathers and lower myself as quietly as possible into the Itchen’s embrace.

The water is delightfully, bone-chillingly cold. I swim out a few feet where the water deepens, settling into a breast stroke against the current, my head bobbing above the surface and unable to see anything above the bank. A fish pops quietly to the surface, as the icy water eddies gently around me.

It is the briefest of dips, my fear of being detained by bailiffs ensuring I don’t indulge in the kind of languid swim which Roger clearly revelled in. Instead, I quietly tread water, before heaving myself out. I dry off and change as quickly as possible, skipping silently through a field gate marked PRIVATE.

Despite this short dip, I feel utterly invigorated, both physically and mentally. My skin tingles as if I’ve swum for hours rather than minutes, the cool water of the river even more refreshing than the depths of Hampstead Ponds in recent days. I also feel as if I’ve got away with it, some small kind of victory against the powers that be that suggest swimmers, anglers and any other river users cannot get along in harmony.

As Roger says in Waterlog, peaceful coexistence between all kinds of river users has existed on the Waveney for decades. I encountered the same sense of camaraderie on the Granta in Cambridgeshire last August, with a flotilla of canoes passing as I swam next to a fisherman.

Walking back along the fenced in path, I can see nothing much has changed since Roger came here in the summer of 1997. The fence posts stand resolute, the banks untroubled by the feet of passersby. The right to roam has changed so much for lovers of the countryside, but in Winchester, it feels as if time really has stood still.

One Comment on “River Itchen at Winchester – hopping over the fence”