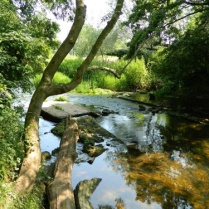 “I returned through the meadows, swimming upriver against the gentle current to Mendham Mill, where the painter Alfred Munnings spent his boyhood.”

Pulling into Mendham, past the Sir Alfred Munnings pub and up through hedge–lined lanes, our hopes of a mill pond swim in Roger’s footsteps are already looking unlikely. The satnav has warned us of private roads and as we park up, it becomes pretty clear that if we want to take a dip where the local painter learned the basics of breast stroke, we’re going to have to indulge in some trespassing.

Mendham Mill is now private and has been for two years. Its owner retains Riparian Ownership Rights, which means he owns the riverbed, but not the water that flows through it. Technically, we can take a dip. But stick a foot down to rest and we’ll be on private land.

Roger would doubtlessly be appalled by this turn of events. I think of his ‘terrific set to’ with some mardy gentry down in Winchester, sweetly arguing the toss that we should all be allowed to swim where we please. Neither me, nor my five companions on today’s trip, have the stomach or bottle for such a battle on a searing hot afternoon like this.

So instead, we wander through Mendham, over the village’s iron bridge and the weed–choked Waveney beneath. Rather than swim downstream, like Roger, Yanny, my wild swimming Sancho Panza and Waterlog Reswum regular, guides us upstream to the idyllic Shotford Bridge.

I’m joined by Molly, who braved the icy waters of Covehithe Beach with me back in April, as well as Tim, who took dips with me up at Holkham and close by at Bungay. The poet Luke Wright and author Joe Dunthorne are also primed to cool off in this most lush of spots.

Tucked away down a steep muddy bank, the Waveney here moves faster than the slow–flowing waters at Geldeston and Mendham. A small jetty eases our passage into the crystal clear shallows. Yanny reads the words of local 13th century poet and lord Hugh Bigod as we each fight for changing space.

Within seconds, we’re all in, wading out to deeper waters. Small chub dart nonchalantly around my feet as I make my way past overhanging branches, before diving into the cool embrace of the river. With goggles on, I swim breast stroke, and glance down as the refracted light dances on the green and golden pebbles laid across the riverbed.

Instead of the usual calm of a wild swim, today’s has an air of wild abandon. Joe clambers to the top of a metal retaining wall, throwing himself into the deep water as we reminisce about old times and talk nonsense while we glide back and forth.

Molly and Luke go off exploring, belly–sliding through the mucky shallows, while Tim and I loiter in the deeper water, getting dizzy swimming small laps. Yanny dons his Victorian gent’s swimming costume and joins us, each of us now in our own private reverie.

Back on the jetty, we dry off, before each heading off again to explore further. The far bank is littered with rubbish: plastic bottles, carrier bags, beer cans. Everyday detritus that’s surely no good for this river, which Roger always called his favourite.

Suitably braced after an hour of paddling, we decamp to The Geldeston Locks, nestled next to the Waveney, for a pint. Within minutes though, we’re back in the drink. Luke and Tim fling themselves off of the bridge and Joe dives expertly, all to the great appreciation of the local kids smoking and drinking on the grass.

I swam here last October. It’s where Roger set off on a canoe tour of this area for a radio documentary and has a magical air to it no matter the time of year. In mid-July though, the water is noticeably warmer, although clogged with weeds which slick themselves to my feet and around my neck. My mind returns to that nagging fear of getting nipped by a pike, so I make my way out and sit on the bank as everyone slowly edges their way back to their damp towels, slung across a convenient bench.

Dried off, we say our goodbyes and head back to reality. As we ease down the drive, Joe, Tim and I talk about the child–like feeling that pervades these summer swims. All wet hair and post–workout shivers. This is the spirit of Waterlog, the spirit of escape and enjoyment of the countryside and its rivers, lakes and sea.

← In search of Bungay Beach
Hampstead Mixed Ponds – an escape →

2 Comments on “Upstream from Mendham Mill”